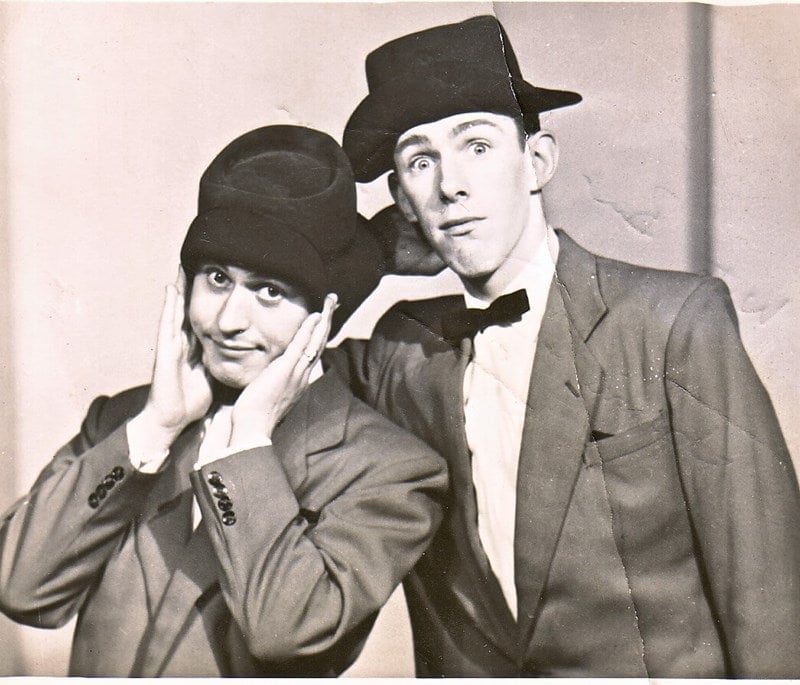 Jason’s musical career has been star-studded, filled with travel, the theatre and even royals. He now calls Lighthouse Lodge home and brings his musical tales and charisma with him.

Jason was born in London but spent most of his life in Australia making hit records. He performed in a harmony duo, sang cabaret, toured on cruise ships and with theatre companies and even had his own television and radio show whilst living abroad.

In his early years, Jason joined the RAF and was posted to St Athens in Cardiff, where he performed in shows and was a favourite among those who were stationed with him. Whilst there he was in a harmony duo called Johnnie.

Two became three when the glamorous June Taylor joined the two and later married Johnnie from the duo now called Johnnie and Duggie Dean. They took cabaret bookings as well as toured American Air Force bases all around the UK. Now under the name of Duggie Dean, he was immediately booked for a season at the prestigious London Mayfair Hotel where he performed cabaret. His next 18 months were spent touring the UK with appearances in big productions with artists such as Roy Castle, The Kay Sisters, Danny Williams, The Patten Brother.

Jason then joined the cast of ‘A Funny Thing Happened On The Way To The Forum’ with David King and then Roy Hudd – then it was straight back into cabaret!

After a chance meeting with Count Basie, Jason was asked to top the bill on the P&O Empress Cruise Liner and he was accompanied by the Eric Winstone Orchestra.

On one memorable cruise, he met Prince Rainer and Prince Albert whom asked for his autograph! He then sang ‘True Love’ with Grace Kelly, from her film with Bing Crosby.

Cruises to Australia were Jason’s favourite part of his career. It was during this time that he was invited to appear on the TV talent competition ‘New Faces’ whilst docked, representing both Sydney and Melbourne respectively within the same series, winning a place in the final for both!

Opportunities came flooding in after his appearances and he started performing throughout the Federal Hotel Circuit the NO 1 hotel chain in Australia.

Following this, Jason released his first record including the powerful ballad, ‘Love Is All’ and ‘Sail Along Silv’ry Moon’, which topped the charts and was particularly well received in Tasmania.

Not being one to hang around, Jason then hosted his own weekly tv & radio show and even toured as Prince Charming in a production of Snow White which lasted many years, allowing him travelled the whole of Australia, Tasmania and New Zealand.

In 2009 Jason retired from his successful career in showbusiness. A career that provided his independence and saw him travel the world many times over. When he came back to England things had changed, he found himself a little older and in need of a little more help. Everything was becoming too much and Jason found himself in and out of hospital.

“The phone call that changed my life”– Jason’s life changed for the better when he got in touch with the team at Lighthouse Lodge; Now Jason is proud to call the lodge home.

Lighthouse Lodge is located on the Wirral Peninsula, in New Brighton, overlooking the beautiful Irish Sea.

We are excited to announce that Athena Healthcare Group has been recognised as one of the UK’s Top 20 Mid-Size Care Home Groups. The Top 20 care groups across the United Kingdom receive an award from the leading reviews guide to care homes, carehome.co.uk, based on reviews from residents, their friends and family. We are always

On Saturday 12th June, residents across our Lodges celebrated Trooping the Colour for Queen Elizabeth’s 95th birthday. We all tuned in to this year’s parade on the TV whilst enjoying a celebration that was fit for a Queen. With the Pimms flowing, there were fresh fruits and a selection of cheeses for all to enjoy.

On Monday 17th May, Birkdale Tower Lodge care home in Southport celebrated its first anniversary with festivities and fun planned throughout the day. With the Lodge beautifully decorated with fresh flowers and black and gold balloons, residents had a fabulous day celebrating amongst friends, singing to their favourite music and tucking into a delicious array

We use cookies on our website to give you the most relevant experience by remembering your preferences and repeat visits. By clicking “Accept All”, you consent to the use of ALL the cookies. However you may visit Cookie Settings to provide a controlled consent. For more detailed information about the cookies we use, see our Cookies Page
Cookie settingsACCEPT ALL
Manage consent

This website uses cookies to improve your experience while you navigate through the website. Out of these, the cookies that are categorized as necessary are stored on your browser as they are essential for the working of basic functionalities of the website. We also use third-party cookies that help us analyze and understand how you use this website. These cookies will be stored in your browser only with your consent. You also have the option to opt-out of these cookies. But opting out of some of these cookies may affect your browsing experience.
Necessary Always Enabled
Necessary cookies are absolutely essential for the website to function properly. These cookies ensure basic functionalities and security features of the website, anonymously.
Functional
Functional cookies help to perform certain functionalities like sharing the content of the website on social media platforms, collect feedbacks, and other third-party features.
Performance
Performance cookies are used to understand and analyze the key performance indexes of the website which helps in delivering a better user experience for the visitors.
Analytics
Analytical cookies are used to understand how visitors interact with the website. These cookies help provide information on metrics the number of visitors, bounce rate, traffic source, etc.
Advertisement
Advertisement cookies are used to provide visitors with relevant ads and marketing campaigns. These cookies track visitors across websites and collect information to provide customized ads.
Others
Other uncategorized cookies are those that are being analyzed and have not been classified into a category as yet.
Save & Accept